May Day festivities go as far back as Ancient Rome, where the first of May marked a weeklong celebration dedicated to Flora, goddess of youth, springtime and flowers. The event remained a cherished holiday in Europe for many years, on which villagers would collect flowers and decorate their towns. Villages would host pageants, games, and dance around a May Pole.

In the late 1870s, the resurgence of May Day traditions began and were later popularized in Canada. Schoolchildren were taught to gather flowers and dance the traditional folk dances.

In 1921, the Mission Hospital Auxiliary brought May Day festivities to Mission in an effort to raise funds for a much-needed new hospital, which could also serve as a memorial for those who had fought in World War I. May Day was initially held at the same time as Empire Day celebrations, which was typically a patriotic event for children, observed around Queen Victoria’s birthday. 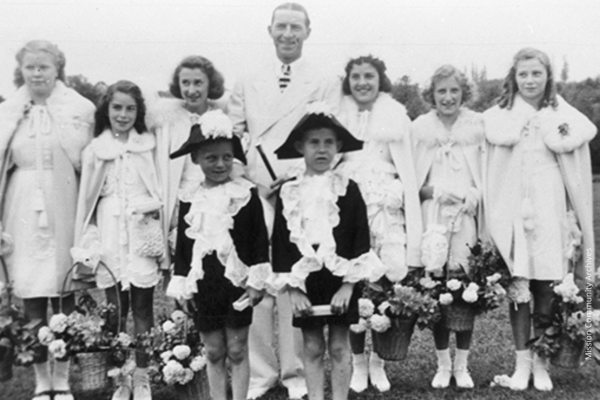 In addition to providing funds for the hospital, the event fostered community spirit and brought all of Mission’s residents together, including those living in the outlying areas. Mission’s May Day festivities featured day-long attractions, including a parade of decorated floats, maypole dancing, the coronation of a May Queen, music, and an evening banquet. All of Mission’s schools took part in the selection of the May Queen and her accompanying party.

The event also highlighted Mission’s diverse community heritage with locals dressed in cultural regalia, dancing and market booths. Attractions at the very first May Day celebration included an “Olde English” tearoom, a fortune teller, and samples of haggis and other delicacies.

The staging of such a large event required a great deal of help, and numerous organizations and community groups came together to assist with a variety of activities, including making costumes, coordinating dinners and banquets, decorating parade floats and arranging musical programmes.

Once the hospital construction was completed, upgrades and expansions were soon needed. Funds were also needed to purchase supplies and for supporting daily operations. May Day celebrations continued in tradition of raising money for the hospital.

The event was briefly paused during World War II, and the Auxiliary held a “gala tea” in the Masonic Hall to raise necessary funds for the hospital. In lieu of the usual celebrations, the May Queen and her party visited the hospital wards and distributed flowers to patients. After the war ended, the Auxiliary turned over the event to the Elks and the Royal Purple lodges, which were both community-oriented volunteer groups.

May Day remained a popular event for many years, but eventually declined in the 1970s. The celebrations ended in 1981, but the 60-year run serves as a reminder of the Mission community’s collective efforts and resilience.