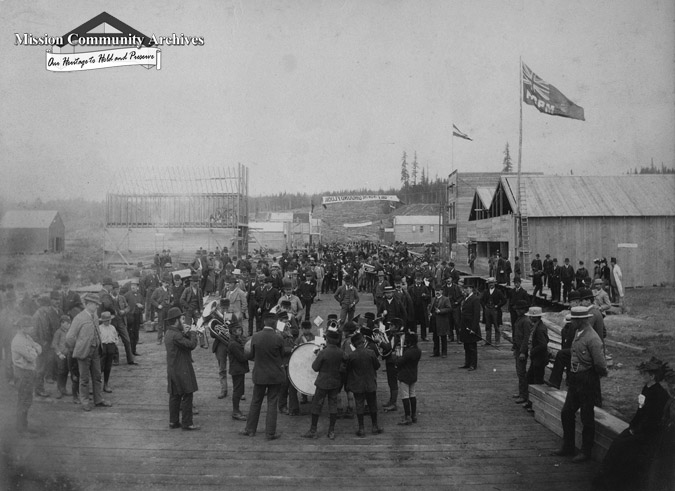 James Welton Horne, a Vancouver land developer, held grand visions of creating the perfect modern city. He was already experienced at urban planning, having been the man behind the development of Brandon, Manitoba. Mission was a prime target, as it was largely undeveloped and situated by the Fraser River upstream from the bustling city of New Westminster. Even more special was that it was about to gain the distinction of receiving the only Canada/US railway junction in BC, meaning that anyone wishing to travel to or from the United States would have to pass through Mission. As a millionaire speculator, Horne could not afford to ignore such a ripe opportunity.

Already, some development by local investors was taking place. Horne decisively bought out all other property stakeholders, and took swift action by hiring hundreds of men to quickly build all the buildings a town would require. Slashing and burning 300 acres of bushland was not easy, but soon the land from the river to the hills had been cleared. Horne envisioned a modern and efficient city similar to the American model, and so divided the land into a grid system of 5,000 lots and 50 streets. Finding the name St. Mary’s Mission too parochial, he renamed the town Mission City. In an attempt to attract potential cosmopolitan investors, he gave the streets grand names such as Washington Street, London Street, and Montreal Street. And of course, there were also ‘James’ and ‘Welton’ streets as well!

As lumber from New Westminster arrived daily, construction took place on a raised plank boardwalk due to the constant flooding of the Fraser River. Several other locals joined in on the development, constructing hotels and stores. A wharf, bank, newspaper office, warehouses, and store-front businesses were assembled, all empty, but Horne had faith they would soon be filled. The approximately 1,700 men who had arrived looking for jobs had already created an economic boost to the small town, and he expected that many others would follow.

James Horne intended to sell the properties he had developed in a giant auction, dubbed “The Great Land Sale”, which was advertised internationally.  Trains and steamships from Seattle, Vancouver, New Westminster, and Victoria were scheduled to arrive in Mission City early on the day of the auction. The construction of the town wasn’t yet close to being finished, but Horne had no time to lose.

On May 19, 1891, hundreds of people arrived in the new downtown, decorated with banners and flowers. The St. Mary’s Marching Boy Band greeted the visitors with jaunty tunes. A fast-paced auction hyped up the potential investors, and land was snapped up by the excited crowd. The air breathed confidence in the future.

But once the excitement had subsided, the mundane reality set in. Many of the buyers of the lots were land investors who lived elsewhere and bought hoping to sell again when the time was right, which left the town virtually undeveloped and empty. The already existing citizens of Mission City would have to build up the town themselves and James Welton Horne’s vision of a grand city would take several decades to materialize.