Home of the Big Red Strawberry 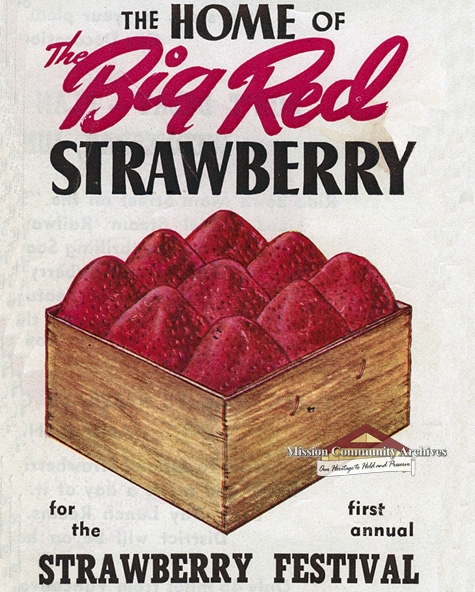 In the early days of agriculture in Mission, fruit was the crop of choice. The season began with rhubarb, followed by strawberries, raspberries, blackberries, black currants, gooseberries, cherries, apples then finally finishing with pears. Some of the major names in fruit farming in the early days were Ed Abbott and George Gibbard in Cedar Valley; John Cade and Francis Vachere in Ferndale; and Tom Catherwood, John B. Shimek and Frank Shook in Hatzic.

The largest problem faced by these early growers was the difficulties associated with transporting fragile produce outside of the district. While the demand for berries was high, shipping was outrageously expensive and the CPR would not provide refrigerated cars, nor prioritize perishables to prevent trains cars laden with produce from sitting idle for days, resulting in many shipments to the prairies arriving damaged or completely rotten. Compounding this problem, unscrupulous buyers from the prairies began to take advantage, reporting intact shipments “damaged in transit” in order to buy at a significantly reduced rate. This situation continued until John Cade grew suspicious about the number of “damaged “ shipments being reported and sent a friend to investigate.

Once Mission’s berry farmers heard the news, they banded together to form the United Farmer’s Co-op, an organization designed to address the problems berry farmers in the valley were facing. The first initiatives of the co-op were to build a facility to store the fruit until it could be sold on to various jam companies, and to petition the Department of Agriculture to hire an agent in the prairies to police the true state of rail shipments arriving from BC.

The opening of the BC Electric Railway caused turmoil in Mission’s dairy industry as producers on the south side of the Fraser no longer needed to come through Mission to ship their products west to Vancouver. This ultimately caused the closure of Mission’s condensed milk factory, which was subsequently taken over by the Kootenay Jam Company, giving Mission its first berry processing facility, finally enabling growers to make use of the berries that were not suitable to be sold as table berries.

In 1924, the Fruit & Mercantile Company, a company that had made its name pioneering the use of cold storage, (using a pre-cooling refrigeration plant to cool both the produce and the rail cars, before refrigerated shipping cars were introduced) had convinced a number of Mission farmers to buy shares in their company. They explained that while the prices given to growers would initially be lower, when combined with the stock dividends they would be better off. However, as berry prices continued to fall across Canada, farmers began to get nervous.

An investigation was conducted and the federal government’s Duncan Commission revealed that a fruit brokerage named Mutual Brokers, based in the United States, had managed to gain influence within dozens of companies in Canada. The brokerage worked in concert to dictate fruit prices to an astounding 75% of the Canadian fruit market, driving prices down and badly damaging the industry.

Mutual Brokers had not overlooked Mission in its quest for the dollar. It was soon discovered that Fruit & Mercantile had also been infiltrated, having multiple workers and directors on its payroll preventing anyone from challenging Mutual’s monopoly. These men were charged and fined, but Mission’s farming community was reeling from the betrayal.

Berry prices soon returned to normal and the BC government assisted the Associated Growers of BC, to buy out the King-Beach facility (previously sold to the Anglo BC Packing Company), which flourished again under the management of Harry Beach. Harry Beach was a trusted member of the community, an important quality in the wake of the scandal. Fruit & Mercantile was restructured under the equally trustworthy management of John Shimek and several new companies also opened their doors, allowing Mission’s fruit and vegetable industry to recover and grow throughout the following decade.

In the decades leading up to WWII, Mission had attracted a large number of Japanese farmers, drawn by the prospect of relatively inexpensive land. These Japanese families contributed an enormous amount to Mission’s berry growing capacity because they were willing to work the hillsides, which was land that was extremely hard to work and generally considered to be poor and unproductive. By 1916, Mission had 30 successful Japanese farmers who banded together to form the Japanese Farmer’s Association, called the Nokai. In 1942, the Nokai had grown to 79 members.

But on December 7, 1941, everything changed. Japan bombed Pearl Harbour and suddenly the war loomed larger in the Canadian mindset. Canada declared war on Japan, and Japanese-Canadians suddenly found themselves in an entirely unenviable situation. Within days, all Japanese-Canadians were required to report to the RCMP to be registered and fingerprinted.

In April of 1942, the forced evacuation of Mission’s Japanese-Canadians began, and over several weeks nearly 600 people were sent away. They were given only the choice of working in the sugar-beet fields in Alberta and Manitoba with their families, or being split up, the husbands sent to road-building camps while the women and children were sent to internment camps in the interior.

All property, possessions, businesses and financial assets of Japanese-Canadians were required to be handed over to the Custodian for Enemy Alien Property for ‘safekeeping’, property which was disposed of less than a year later through a corrupt series of auctions, land sales and outright theft.
The effect on Mission’s berry industry was devastating. The farms that had been confiscated represented 75% of Mission’s strawberry capacity, and the new owners were unprepared to work as hard as the previous owners. Their failure was evident in the crop yields of the following year. In 1941, the year’s average was 190 freight loads. After the harder-working Japanese-Canadian owners were removed in 1942, the crop yield average fell to a miserable 30 freight car loads.

With the advent of WWI, the berry industry in Mission took off as demand for jam to be sent overseas soared. This high demand saw that Mission got two more jam facilities, a huge boon for Mission’s berry farmers. The Kootenay Jam Company had run into financial trouble but was purchased by Mr. Harry Beach and Mr. King, becoming the King-Beach Company. Despite many changes in ownership, the Company would continue to sell all manner of jams, jellies, marmalades and other canned fruit and vegetables under the King-Beach label for many years into the future.

With so many young men overseas, the berry industry turned to young women to fill out its work force. Berry pickers in particular were hired in droves, swelling Mission’s population by 2000-3000 workers each summer. This trend continued after the war, and the arrival of all these young women in Mission proved an enormous distraction for the young men, particularly those young soldiers now returned from the war. Andrea Schroeder writes in “Carved from Wood”:

Hatzic and Cedar Valley’s roads began to look like long drawn-out parking lots of buggies and cars after 9 o’clock, and what they imagined went on in those vehicles so offended some of the more strait-laced landowners in the area that Mission Constable Duncan was called upon to make regular and disruptive patrols. (Duncan just grinned and pointed out that his job was to keep the human race from being damaged, not from being created.) Frustrated at the number of pickers he was losing to the impulse of passion, Frank Shook is said to have spent his evenings rowing patrols around Hatzic Lake, armed with a rocksalt-charged shotgun.

Elice Shook wrote of the activities and parties planned to keep the girls busy in their dormitories and of hiring a matron to ‘see to their comfort’ (and presumably to prevent them from sneaking out!). When the Soldiers’ Settlement Board offered land grants and low-interest farm loans to returned soldiers, a surge of marriages and farm purchases followed. The unexpected side-benefit of Mission’s success with berries was a notable rise in the resident population (and subsequent housing boom), as many of the girls who came for the summer looking for work found rather more than that and were convinced to stay.

In 1946, the war was finally over and Mission’s residents were in need of a celebration. The Mission Memorial Hospital required renovations and the sagging berry industry also needed a boost, so the Board of Trade came up with the idea to put on a ‘Strawberry Festival’. Seventy-five percent of the profits would go towards the hospital, and berry growers would be encouraged to improve the quality of their berries by competing for the title of “Strawberry King”.

To encourage attendance June 26, the day chosen for the first Strawberry festival, was declared a public holiday. In addition to the Strawberry King, votes were also cast for the Strawberry Queen (pictured left). Other activities included a baseball tournament, skill games, and even a log-bucking contest.
One of the committee members, Jimmy Gunn, had the idea to add a “Soapbox Derby” as an aside to the festivities, launching the beginning of a whole new iconic Mission event, which would eventually grow to overtake the Strawberry Festival itself.

Despite these attempts to boost Mission’s berry industry, it was never able to recover its pre-war glory. The flatlands across the river were proving more suitable for the growing mechanization of farming, and over the following decades, Mission’s presence in the industry gradually dwindled away. 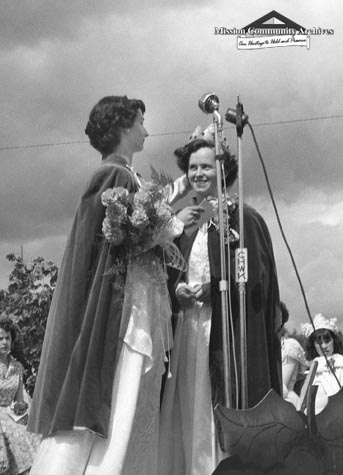